One anomaly in the taayii hawilh family is worthy of note. Naawii’ik, head chief of the Nash’as’aht, felt that his first wife became pregnant too soon after their marriage. His suspicions led him to reject both his wife and her son, ‘Appiku’is, who received no Nash’as’aht rights. He remarried and his next son, Yaayuukwi’a, became his heir. [2]

Nash’as’aht hawilh, Yaayuukwi’a, the Uukwaatis’aht chief who took over the T’ukw’aktl’a’aht ushtakimilh seat at the time of amalgamation with the Ts’ishaa’aht, had a son, Nuu’nuup’ichumiik, who succeeded him as the head chief. As none of his sons lived to maturity his eldest daughter, Hayuuku’utl, was his principal heir. Despite having her sit beside him in ceremonial activities, indicating her to be his successor, the first seat of the Nash’as’aht did not pass through her. Instead, although Sapir offers no explanation as to why, the right to the seat was transferred through Nuu’nuup’ichumiik’s sister, Ya’ai’aks, to her grandson Sayaach’apis. [2]

Tuutaa’ap [Yaayuukwi’aq] had his daughter Wiitsah, wife of Sayaach’apis, sit beside him during ceremonials, thus indicating her to be his heir. [2] 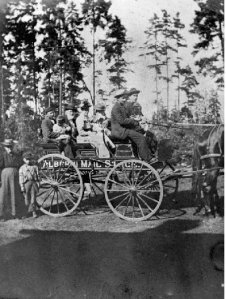 Margaret had five daughter and three sons with Adam Lhuutisi Lauder, Helen, Bessie, Lizzy, Jack, Ernest, Norman, Margaret (Kiiyat) and Molly. Margaret Tl’up’ini’yakshitl’s son died without children, in turn, the right passed to her daughter, Mrs. Lhuutisi, and on to her daughter Kiiyat.

Lyuuxum’s daughter married Lhuutisi, Captain Bill’s younger brother. Their daughter was the heir to Lyuuxum’s seat. She is also listed as the heir to Kw’aamalhsiniyak, the second ranked Maktl’ii’aht chief. [2]

Puunnii had one son with John Walter G. Underwood, Watty. 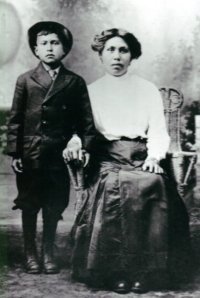 Great Grandpa Robert Sport (Granny Louisa’s step-father) mending a salmon fishing net. The picture on the right is Robert Sport describing in Ohiaht dialect his understandings. The First Nations answer to the dominant society, “If you dig deep near the beach, you will find our clam shells. If I dig where you live, I will find cow bones”. Elder Robert Sport at Bamfield, B.C., 1975.

Thomas Watts Sr was a fisherman and worked as a longshoreman for 45 years at MacMillan Bloedel, a Canadian forestry company, which was bought by Weyehaeuser in 1999. My father was a foreman for the same company for 27 years. He was a physically very strong and active man. 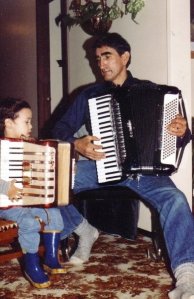 Dad, Tom Watts Jr, won a trophy for most outstanding native athlete in Canada in 1962, the Tom Longboat award. Shaking his hand is the them mayor of Port Alberni (top left). Dad is still a great fisherman and a great country dancer. Senior A’s Basketball Team when they won the Canadian Championship basketball tournament (top right). Dad won over 400 awards for his athletic excellence, sportsmanship and leadership qualities in basketball, softball, soccer, track & field, boxing, wrestling and gymnastics. Two outstanding awards were the Tom Longboat Award for Canada won by the Amateur Athletic Union of Canada in 1962 where his ability in the field of sports was recognized on a national scale, and the award for winning the Canadian championships while playing for the Alberni Athletic Senior A’s in 1965. Dad was inducted into the ADSS and the Morgan William Classic Hall of Fame which celebrated his athletic accomplishments over 50 years. He was recognized as one of the top athletes to ever come out of the Alberni Valley. When dad stopped playing sport, he continued to fish and got interested in country dancing. He started to travel the world to attend dance workshops. Dad teaching my son, Stephen, how to play the accordion (middle left). Wallace holding Gianni and dancing with dad at a feast in the longhouse at Alert Bay (middle right). My brother Wallace Watts was a Captain for United Airlines for about 30 years (bottom). 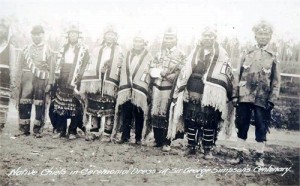 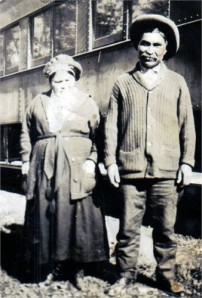 Grandpa Stephen is the third from the right. Chiefs lined up at Sir George Simpson’s centenary, Northwest Coast of North America, 1892. Stephen Morgan’s earlier names were Gwa’a’muk (young man), Wi’sakes, and Tsi’ba’saa. Stephen lived in Gitsegukela, BC. Stephen was a warrior, not in war but taking action when problems arose. For example, the earliest accomplishment was to board a Russian ship for three months while his people trapped for fur to exchange for guns. The story was that he became the “ransom”. Happily, when the ship returned, the furs were ready for trade. When the government surveyors arrived to make reservations, Stephen pulled out the surveyor’s stakes twice. For this, he was sent both times to the Okalla Federal Prison. Even though Stephen and many other Chiefs voiced their objections to the government regarding the encroachment on their land by the European, all of their objections fell on deaf ears. He finally went to England to voice his concern to Queen Victoria.  Later when the Canadian National Railway was about to pass through their territory, Stephen halted the railway construction crew until the supervisor arrived. Stephen negotiated the “Indian half fare” for the Git’ksan and where ever the train passed through the First Nation territory.  The regalia that We’get (Stephen) is wearing symbolizes his membership in the Git’ksan Secret Society. Stephen of the Fireweed Clan and Sarah (nee Wilson), of the Wolf Clan, were married in Kitwanga, BC in 1909, and had 3 sons and 2 daughters, one son was my grandpa Wallace Morgan. Sarah Morgan was also known as Chief Ten’im’get.

For many years, from the time that band councils were established in Gitxsan territory, Gitxsan persons have either been appointed or elected to the positions of chief and council Many of those individuals, including Stephen Morgan and Wallace Morgan, were highly regarded hereditary chiefs nd had no difficulty in their role as village leaders. Despite the efforts of the BC and federal governments to ignore them, these men fought tirelessly for resolution of the “Land Question”.

Grandpa Wallace “Ax’ti’hix Gi’bu” Morgan, mom’s dad, always willing to entertain people with his violin. Grandpa married Chieftainess Tsim’hl’us, Martha Kitselas when she was 16 and together they had 14 children. Wallace was born in Kitwanga in 1903 and became the head Chief in Kitwanga, Wallace is in full regalia (middle). Kitwanga chief, Wallace Morgan, explaining Indian claims to students in New York City, 1969. 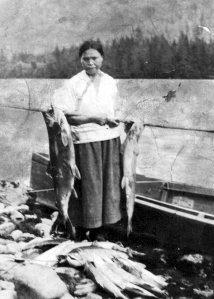 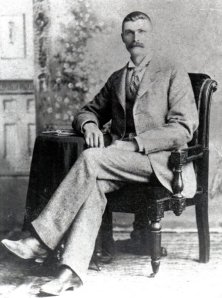 My grandma Martha’s mother, Elizabeth Annie (nee Guno) was married 2 times. First to Chief Kitselas and 2nd:Richard Lowry. Elizabeth was born at Nass River, BC, in 1882.  Scottish great grampa Richard Lowrie was born in 1868 in Tillsonburg, ON, and was a prospector miner in the area of Usk. Richard pre-empted the whole townsite here in Usk. Pre- emption was a method of selling Crown land which had not been fully surveyed. This was designed to provide temporary title or permission to occupy land to incoming settlers so they quickly could build a homestead and commence agriculture. 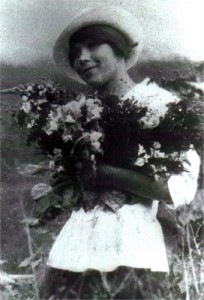 My grandma Martha Morgan (nee Kitselas, Lowry) was born in Kitwanga, BC, in 1903 and married grandpa Wallace in 1918 at Port Essington, BC. Martha was know as Chieftainess Tsim’hl’us and Chief Mel’hus. 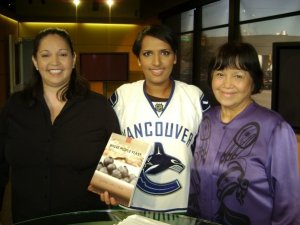 Mom, Dolly (nee Morgan) Watts, McRae graduating from the University of British Columbia with a degree in Anthropology. Mom and dad, Ken, former Mayor of Port Alberni, and now Freeman of the City. Annie Watts (my younger sister, chef, computer programmer and author), Simi Sara, and mom, Dolly McRae. After a cooking demonstration on CityTV – promoting a new cookbook that they co-authored called Where People Feast, An Indigenous People’s Cookbook which won a Gourmand Award for Best Local Cuisine – first place in Canada out of 6000 entries.  As the Canadian winner, their cookbook was then entered in a global competition and placed in the top 10 out of 107 contries that were entered. After the great success of the first cookbook, Annie went on to author a dairy and gluten free cookbook called “beHealthy Cookbook”. After catering and having a food stand that sold bannock, bbq’s salmon and buffalo burgers, in 1995, mom found a restaurant to buy, renovate and opened her second business, Liliget Feast House which seated 50 people. Local native artists sold their art on consignment. Liliget closed it’s doors in December 2006. Mom received an award for business presented by His Excellency Gordon Campbell, former Premier of British Columbia.

Tseshaht, a tribe belonging to the Nuu-chah-nulth Nation made up of 14 tribes and that is located on the west coast of Vancouver Island, British Columbia. Tseshaht are the people of Benson Island, one of the Broken Group Islands in Barkley Sound and came to own all of the Broken Group Islands and lands up the Alberni inlet to Port Alberni. Today, the Tseshaht remain in the Alberni Valley and still hold their traditional territories in Barkley Sound and the Alberni Valley. The land of Tseshaht, has been declared a park reserve by the Government of Canada. Historically, the Tseshaht people were whalers and fishermen, and their lives revolved around their territories on both land and water. The Tseshaht people assumed full control of the Somass River and established a fishing infrastructure where the ownership and utilization of fishing sites was governed by “Tupaati” – a system where hereditary privileges or prerogatives determined the ownership and use of practically everything of value. The Tseshaht First Nation reserve land is now a vibrant, active community, with a membership of over 1000 members and with an active and progressive natural resources-based economy, primarily with its abundant fisheries and well-developed forestry interests. The Tseshaht community is involved in many initiatives from construction to forestry, from social development to education, from the fisheries to mental health and is quickly moving towards self sufficiency. Port Alberni is a nearby City, but the Tseshaht community is not part of their municipality.

Cynthia Rayner is a consultant at First Nations Management Consulting. She is a powerful business driver whose entrepreneurial instincts and clarity of vision have carried multiple companies through rapid and continuous growth. Cynthia obtained her university degree in Business with a focus on Management and Marketing. She returned to the work force as a Director of Tribal Operations, Senior Administrator, Executive Health Director, and Education Manager.
View all posts by Cynthia Rayner, MBA →
This entry was posted in A Great Legacy. Bookmark the permalink.